Why We Almost Abandoned Selling on eBay, And What Made Us Stay

When eBay opened their offices in Israel, in 2012, we were invited to a meeting, being one of the best performing accounts in the country.
They were surprised when we told them we were one foot out of eBay, sick and tired of busting our asses just to survive on the marketplace.

We developed CrazyLister for the rest of us to give all eBay sellers the power to sell like the big brands.
We launched this blog, hoping that by sharing our experience, learning how to sell on eBay with all the wins and fails, we would help small and medium businesses create a sustainable income selling on eBay.

Until recently, it felt like swimming against the stream – eBay was making it harder and harder for the “average Joe” to sustain a business.
We were feeling it directly – users’ main reason for canceling their CrazyLister accounts was “I closed my eBay business.”
eBay’s renewed focus on small and medium sellers revives my personal belief in the marketplace that was our starting point back in 2008, being two students making an income to pay our bills. And it pushes us forward with CrazyLister, this blog, and several more ideas we have on our mission to “Help the average Joe to sell like a pro.”

Selling on eBay was often an uphill climb for us. It was depressing doing our absolute best, making our customers happy, just to find out that it was never enough, and one slip, one unhappy customer out of hundreds could put us out of business (and they did, and it was awful).
Add to that the major hits that eBay suffered as a platform, analyzed by Annie Mcdonald in her brilliant post – Why Are My eBay Sales Down? – and you’ll see why we were seriously considering shutting our eBay business down once and for all.
I felt that eBay lost their way, pulling our business down with them.

The Darkest Hour is Just Before the Dawn

And then 3 things happened:

Over the years, I’ve learned to judge people by actions rather than words. More so when listening to CEO’s who are being paid to speak.
If you listen to eBay’s CEO, Devin Wenig’s, keynote speech at eBay’s 20th anniversary, on minute 17:45 he says –
“For Sellers, we have a laser focus on small and medium businesses.”

If you’ve been (like us) a small to medium business selling on eBay for the past several years, most chances are, your life on eBay was getting harder and harder until it became almost unbearable.
The sellers’ community felt how eBay was leaving its roots and trying to imitate Amazon’s success – attracting large brands, trying a catalog approach, introducing new strict policies (that are virtually impossible for the small and medium sellers).

Normally, I would discard Devin’s claims. After all, eBay got a lot of hit from the small and medium sellers. Why not try to “sweet” talk them back?
But I must say that for the first time in years, I feel optimistic about eBay’s direction – Back to its “core users”, the ones who made eBay what it is today.

eBay purchased PayPal, helping it to eventually become eBay’s major revenue generator. With PayPal gone, eBay must, once again, focus on its main business – the marketplace. And things weren’t bright, as we discussed above.
eBay is simply forced to make this change in direction, as this is their main strength and proposition value – connecting people with people. Amazon is much better at connecting large brands with people; they control all the verticals from payment to shipping.
From my perspective, Devin is steering his giant ship in the right direction.

eBay’s CEO promises are great, but they are worthless without actions. Seems like eBay is standing behind their words and are taking actions –

eBay’s 2015 fall update regarding seller’s standards were a major step towards the small and medium businesses –
http://pages.ebay.com/sellerinformation/news/fallupdate2015/seller-standards.html

They are making it much simpler and straight forward for sellers.
Measuring performance only by the really important metrics that the sellers can actually control – 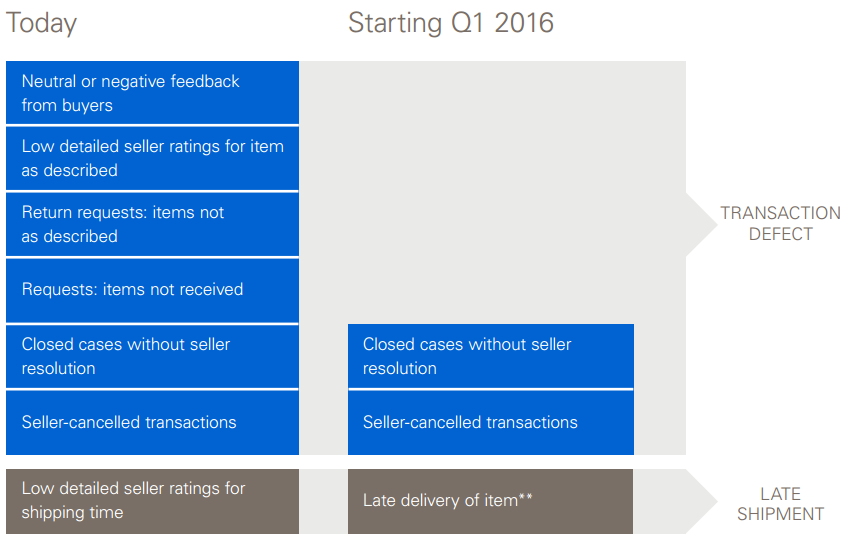 Any Small or medium business selling on eBay for the past years can tell horror stories about their accounts being suspended, driven to below standard rating, limited and so on, because of a miserable situation completely out of the sellers’ hands: Postal system strikes causing delivery delays, item being damaged on its way, customers leaving negative feedback by mistake, etc…
When you’re not doing huge volumes, every case counts! This was effectively forcing Small or medium business off of eBay. With the new metrics in place, hardworking Small or medium business will stand a good chance of getting high standards on eBay again, while before, it was becoming virtually impossible.

Building a business of any king is hard, extremely hard. With the rise of eCommerce more and more businesses join online sales and competition gets more intense. I predict it will get even harder and small businesses will have to step up in order to rise above the noise.
Even if you decide that eBay is too competitive for you and try to sell on Amazon, Wish, Etsy, or your own website, you will meet the same type of challenges. Every platform has its own rules and policies, every platform has advantages and disadvantages (we outlined them in the eBay alternative post recently).

The principles to building a successful online business haven’t changed much and it has everything to do with working your ass off, there are no silver bullets, no shortcuts.
As the competition gets more and more fierce I would suggest that on top of working hard you have to work smarter, there is an abundance of information at your fingertips, take advantage of it to learn from other experts and grow your business the right way (when I started selling on eBay I didn’t have a blog like this one to learn from).

2017 was an extremely turbulent year for eBay sellers, eBay has made significant changes starting from eBay active content ban to the new links policy. These changes caused tons of confusion among sellers, eBay did a terrible job communicating the changes and the sentiment overall has been quite negative. We tried to explain these changes in the simplest way and provide practical steps for sellers to stay on top of those changes, nowadays it’s important more than ever to pay attention to seller updates and implement required changes.

What the World’s Top eBay Sellers Add to Their Listings to Increase Sales? 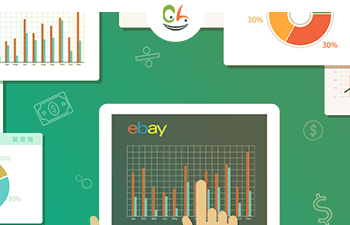