One of the most recent developments in eCommerce is voice commerce which is a technology that both Amazon and Google are both investing in. Amazon has invested in its device dubbed the Echo while Google has come out with Google Home. This technology is quickly catching on and creating a large niche – in the past six months alone voice command technology in general and voice commerce in particular have become the focus for both online retail giants as well as consumers who seem to be adapting surprisingly quickly to this novelty. In this post I will explore:

What is voice commerce?

Voice commerce is a software application often used on commercial websites. It is meant to replace or at least offer an alternative to using your keyboard and mouse in order to navigate eCommerce websites and purchase items. Some voice commerce platforms have sophisticated voice recognition capabilities and most of them surpass the very basic ‘yes’ or ‘no’ and can process more complex sentences and responses.

The main advantages of voice commerce include:

What is the history/ background of voice commerce?

Verbal communication has been around since the dawn of mankind, way before people invented written languages. Speech is much more intricate than writing as it has many levels of intonation and is therefore a more complex mode of communication to program into a computer. Voice recognition technology originated in 1961 when IBM came out with a computer called Shoebox which had mathematical capabilities but could also identify 16 words and 9 digits. It is quite incredible that voice recognition technology actually preceded both the invention of the mobile phone (1973) and the internet (1983).

Over the past decades we have seen little to no progress in this field but within the last 5 years Apple and Amazon have made significant progress, paving the way to virtual assistants the likes of ‘Siri’ and ‘Alexa’.

Despite much skepticism from some users and market analysts, the facts tell a very promising story about voice recognition technology as well as voice commerce:

Voice commerce decreases the amount of time it takes to complete a purchase dramatically and allows one to shop in any situation:

Just as naturally as speech comes to us as human beings so too voice commerce will become second nature.

Another aspect to take into consideration is personalization. Buying experiences can be tailored to a customer’s needs and be used to verify one’s identity. This will eliminate a need to log in and will allow companies to gather:

Imagine logging into Amazon and the operating service already knows your favorite brands and color preferences and guides you to products on sale which are very likely to be of interest to you. 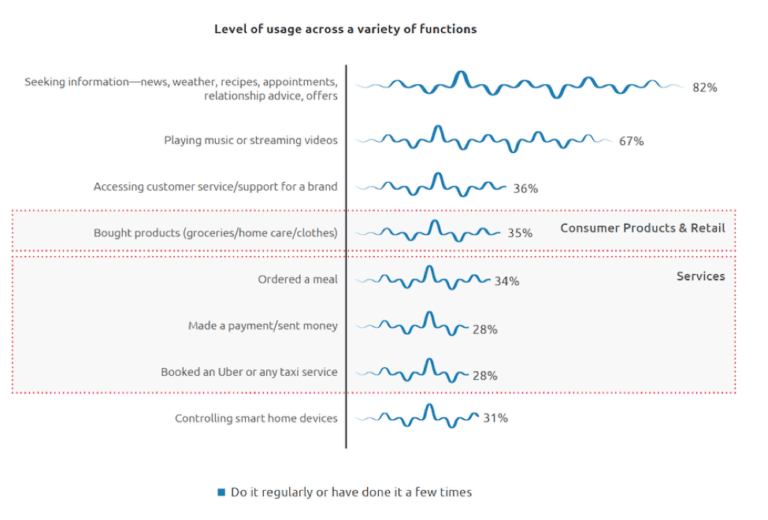 The key challenge for online merchants though will be SEO as written search optimization and voice based optimization techniques differ fundamentally:

Another challenge to be overcome is marketing products purely using verbal descriptions and not images. So sellers will need to come up with:

Despite these hurdles, leveraging this new technology to your benefit seems like a wise gamble. According to analysts at Gartner Group, early adopters stand to gain as much as a 30% upturn in eCommerce revenue by 2021.

An interesting trend to take notice of is new data released by Delineate research firm showing that many users turn to voice commerce specifically when it comes to ordering groceries and toiletries.

Beyond the fact that voice based assistants as well as commerce is gaining traction, it is interesting to look at what devices people are using to access voice commerce. This may have big impacts for omni-channel marketing strategies and it is good to process these statistics in order to get ahead of the market curve. The mode of usage of voice assistant users as a percentage looks like this:

It is also useful to know what kind of engagement is popular on voice platforms:

Which eComerce giants are embracing this paradigm shift? 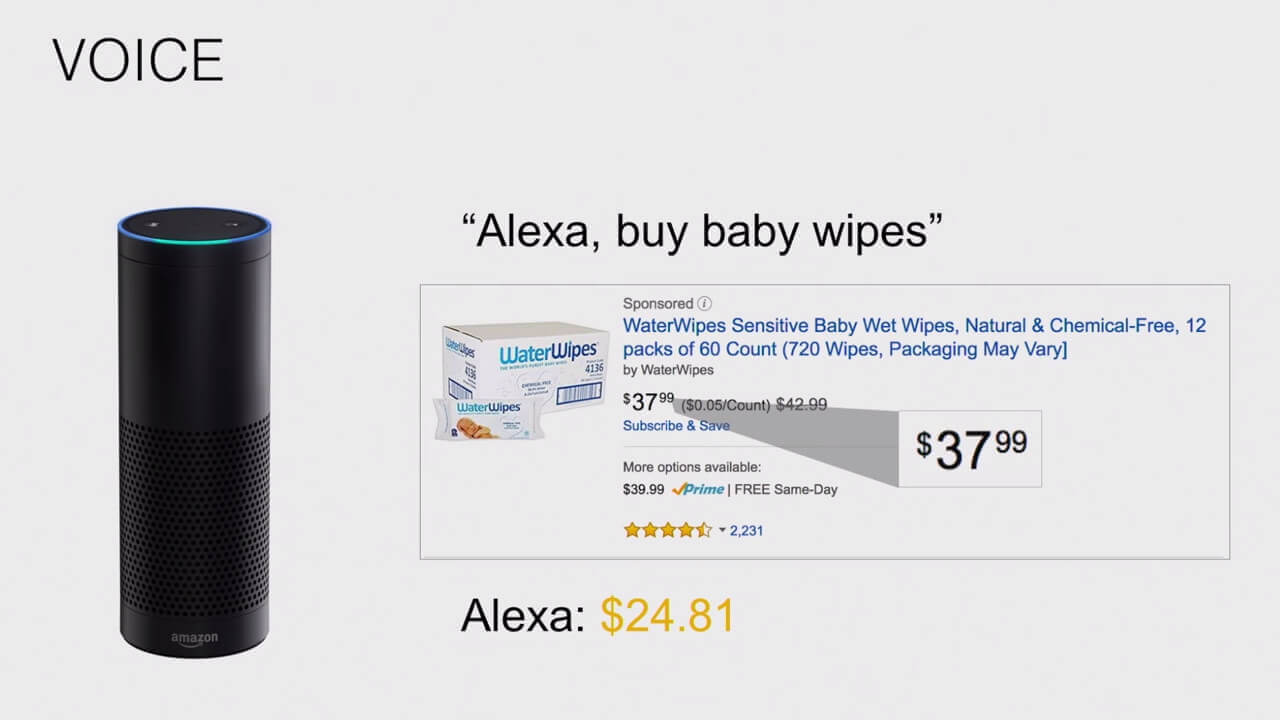 2. Google – Already facilitates the sale of physical products through Google Assistant and third party apps. Additionally, Google has partnered with over 40 major brands such as Walmart and Target which have become part of the Google Express program which supports voice commerce. 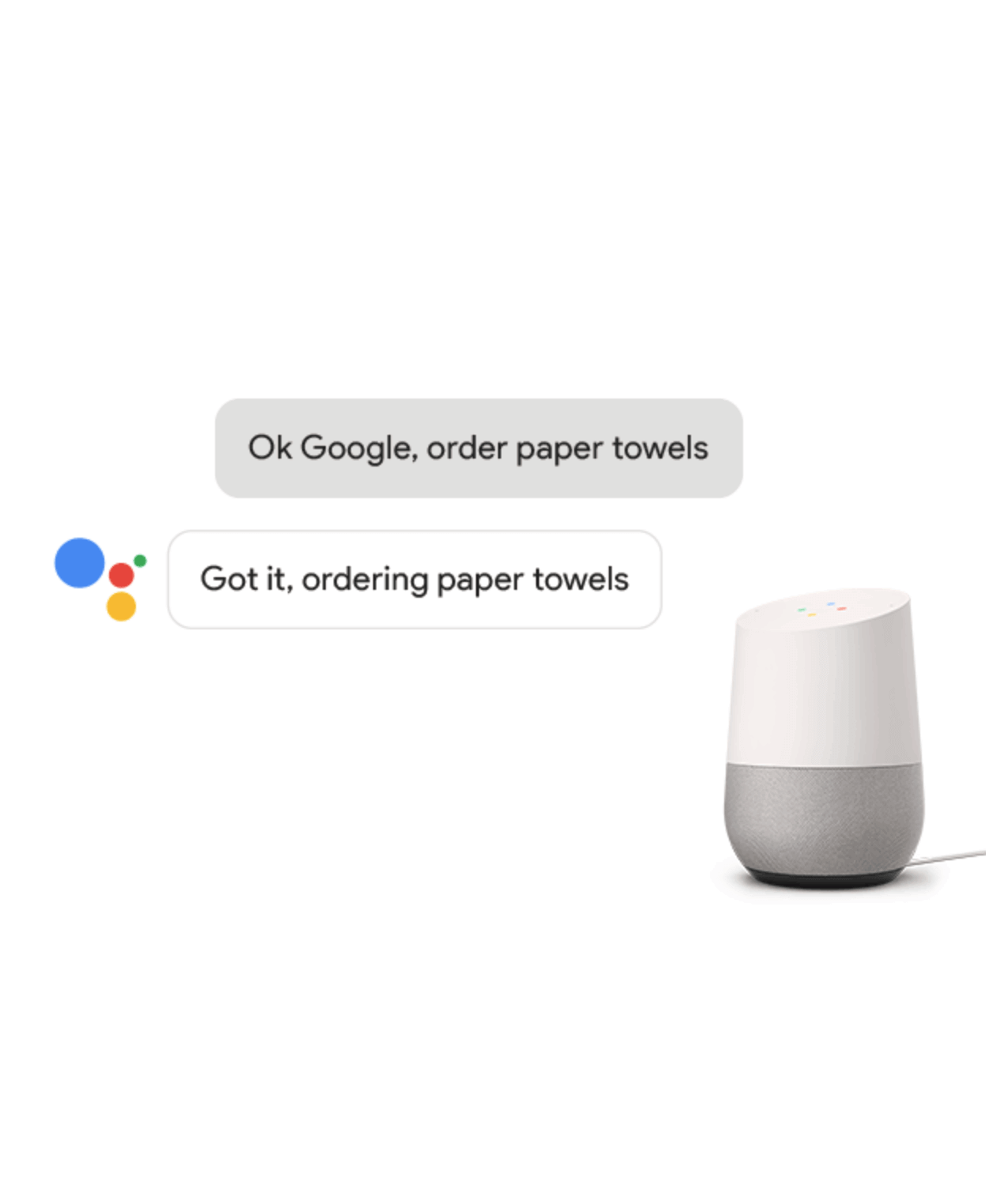 3. Apple – Siri is expected to be able to facilitate voice commerce through Apple Pay in the near future as well, though it is not currently available 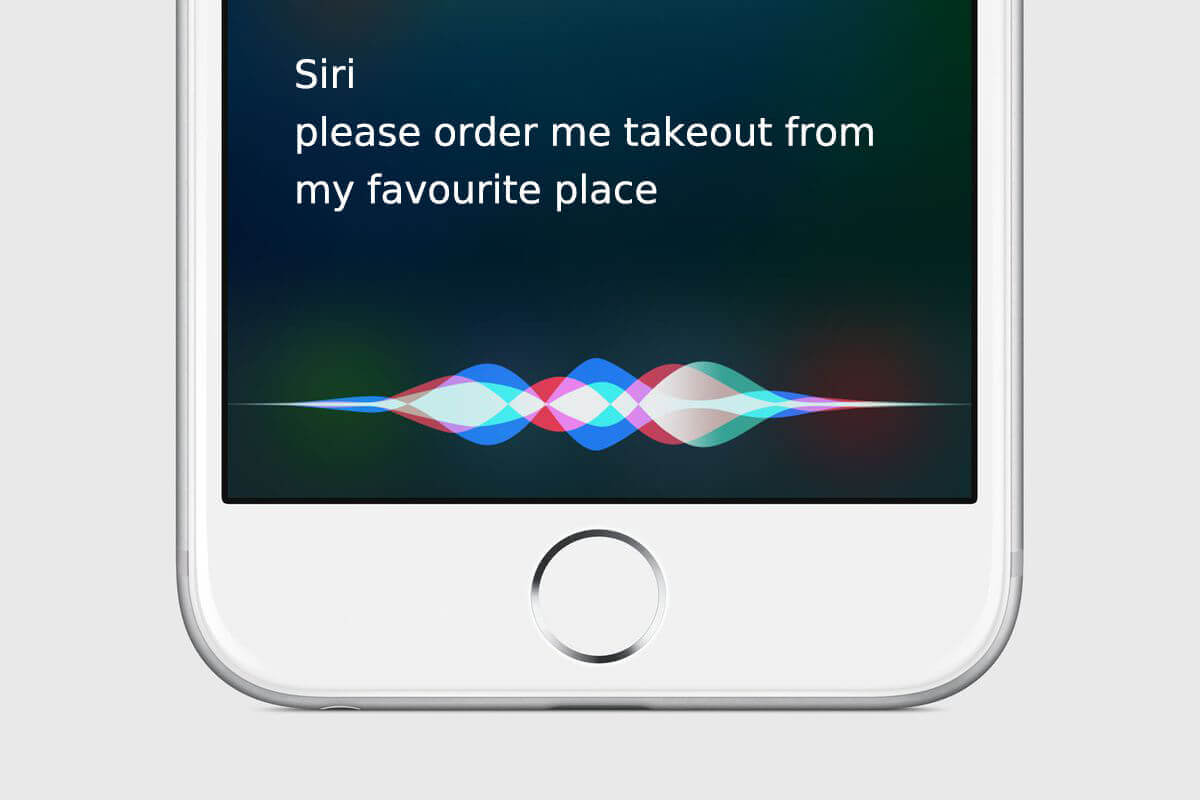 The simple fact is that these platforms know voice features are in demand and that is why they are working tirelessly to offer this to customers. Alexa and Google Assistant are also recommending certain brands and this is going to create placement wars for merchants who want to be publicized.

1.   Establish a presence in voice apps in order to enter the consumer consciousness and establish a point of purchase. For example you can use Amazon’s Alexa Skill Kit which offers APIs (application programming interfaces) and tool which help you create voice driven listings. There are quite a few ‘Alexa Skills’ which can help merchants. For example you can use tools such as ‘UPS’,  which allows shipments to be tracked via voice commands and therefore makes your products more accessible to voice consumers.

What is the future of voice commerce?

Based on the statistics and numbers I presented, voice commerce is in a position to play a significant role in eCommerce. All the infrastructure needed to allow voice commerce to grow is already in place and is becoming one of the quickest innovations to be adopted in recent history.

Going forward, a key issue will definitely be security though – besides having to create a seamless and enjoyable experience, people have to feel secure using their financial information over voice operating systems. The technology is the same as that being currently used by banks so there are no unique risks, it is just a matter of earning customers’ trust. The key concern is that once logged in, anyone within earshot can purchase items at your expense. Certain solutions are in play such as using pin numbers or developing a unique ‘voice print’. The line between comfort and security is very delicate and the right balance must be found.

But as consumers become more trusting of voice commerce and as the technology continues to develop as far as natural language capabilities are concerned, new exciting opportunities may present themselves. This may include opening a bank account or extending your line of credit through voice based devices or even running your entire eCommerce business using only your vocal chords.

Voice activated devices and commerce in the future will develop versatility which may allow you to begin a purchase process on your Amazon Echo in your kitchen, continue the process via your phone/bluetooth in your car and finally complete the purchase using your computer speaker or headset at work.

Amazon is currently poised as the global eCommerce giant with the largest market share of smart speakers and voice technology – around double the size of Google’s share. Amazon reaches customers using its voice activated assistant dubbed Alexa who can help you via pre-existing hardware such as a cellphone or on Amazon’s own relatively new gadget – the Echo.

Alexa can help you gauge the weather and the news but more importantly allow you to find products you need on Amazon and many times offer you Alexa- exclusive discounts. For example, say you run out of coffee capsules, you can simply shout out a request to Alexa asking for Nespresso capsules and she will find them for you, tell you the price and ask you if she should order it. Once you answer ‘yes’ your purchase is complete and you will receive your item directly to your door as with any other Amazon purchase.

Alexa is designed to deal with natural language requests and can help you find very specific items as far as:

As far as having Amazon Prime is concerned, you don’t have to be a member in order to make a purchase on the app but do have to be a Prime member in order to make a purchase using Amazon Echo. If you are ordering over the app though and are not a Prime member then you need to complete the order manually which is a bit of a turn-off for customers who are enthusiastic about voice commerce. This is due to the fact that Echo users have what is called ‘One Click’ ordering enabled.

Many people underestimated the mobile phone or the internet when they first hit the market. Voice powered systems in general and voice commerce in particular are uniquely positioned to have a similar impact on markets. As a brand or as an eCommerce merchant you cannot afford to be left behind – consider taking some steps in this direction.

Please share any positive or negative experiences you have had with voice commerce and let fellow merchants know what you think the future holds.