Last year we researched eBay’s marketplace to uncover the Top Selling Items on eBay 2019 and their respective categories. We’ve also shared insights about sell through rates, average prices, break down by country and item condition. This post has quickly become our most popular on the CrazyLister blog, providing sellers with actionable insights to decide what to sell on eBay.

Today, we’re updating that post and giving you “Top Selling Items on eBay 2020” where we share the most up to date data.

What’s new in 2020? We took our research one step further and collected listings’ structure data. This way, we not only answer the question “What are the top selling items?” but also “How do I sell them?”

Uncovering the Top Selling Items on eBay for 2020

Below is a breakdown of the top selling items on eBay that contributed to this growth.

The data below shows the most trending/hot items in their respective categories, i.e the top selling items on eBay for the past 7 days. 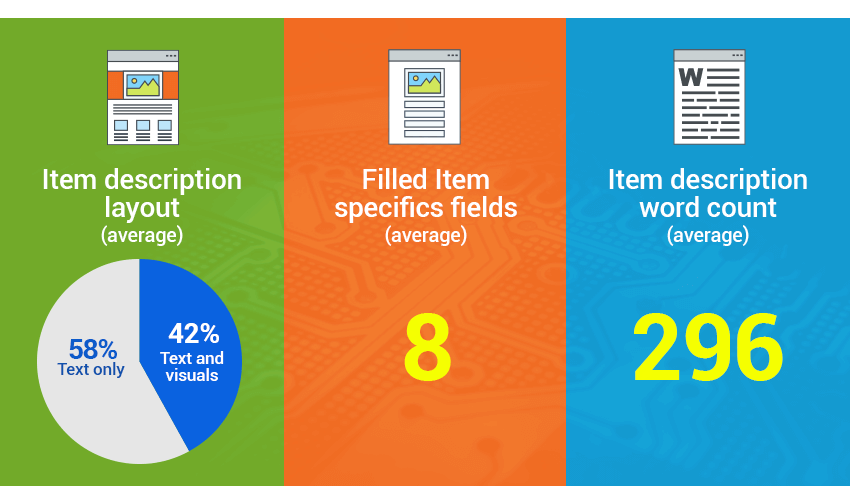 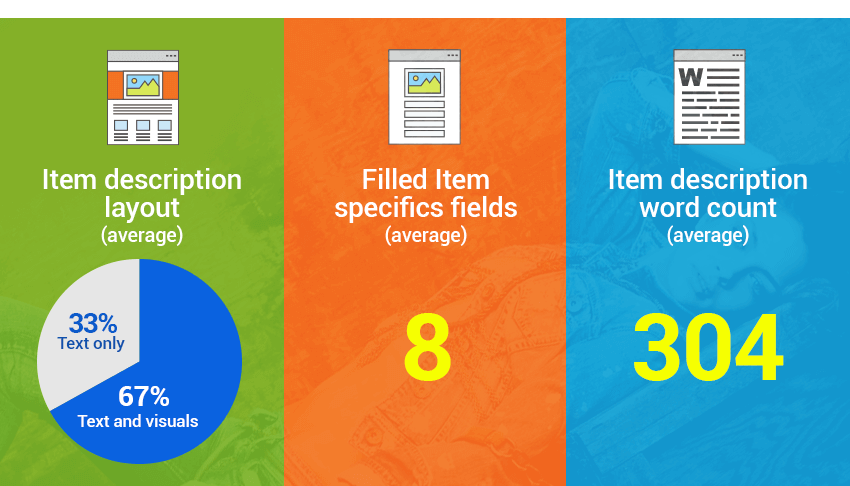 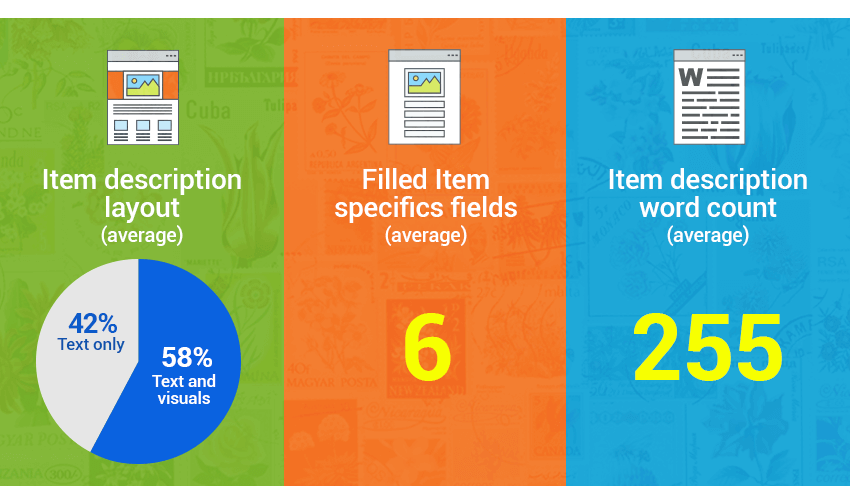 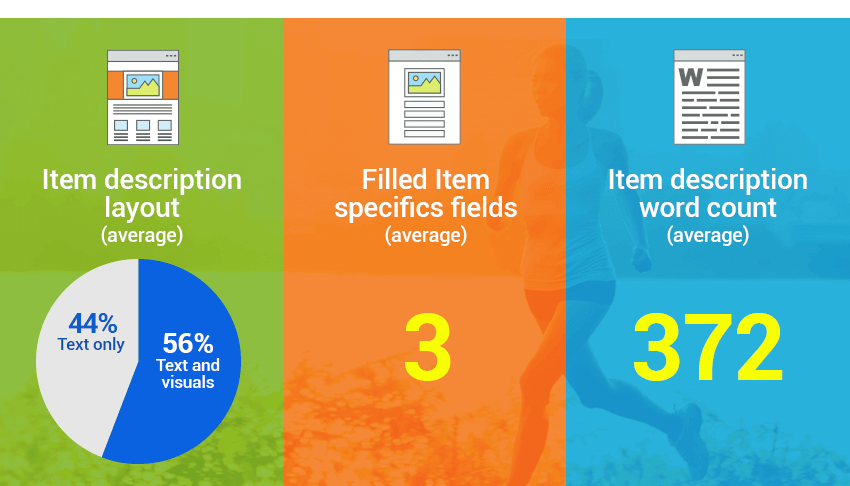 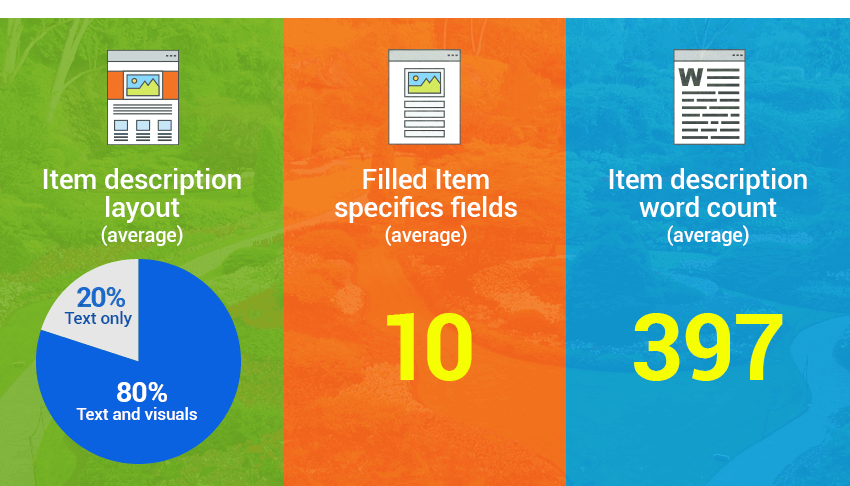 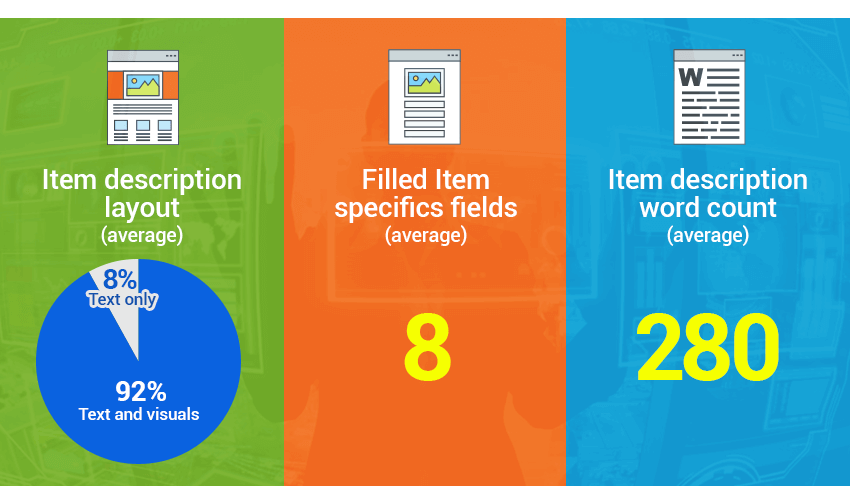 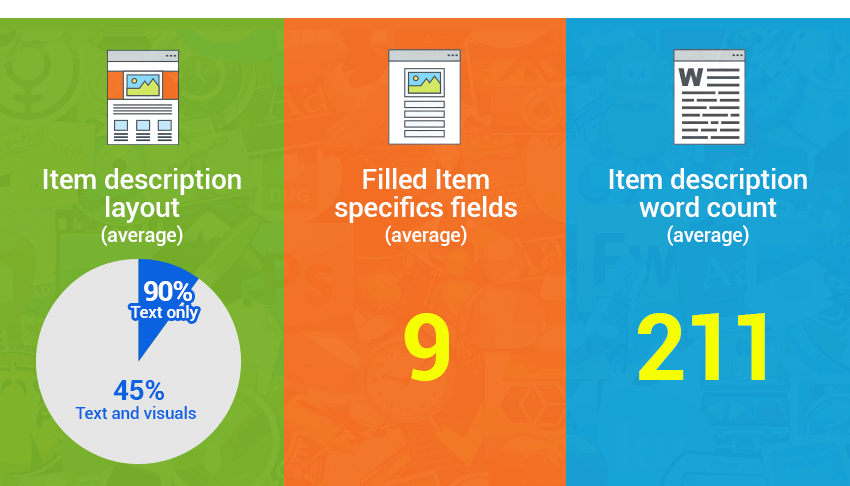 You can find the full infographic here.

Let’s dive into it –

What eBay site has the best sell through rate?

US, UK, Germany or Australia?
Where do you think listings have the best sell through rate?

*The sell through rate indicates how many of the listings actually generated at least 1 sale.

Here is what the numbers say –

What can you learn from this?
It may be a surprise from the first glance, but eBay US is by far the most crowded of all, it has the largest amount of active listings and the largest competition – thus the lower overall sell through rate! (only Australia is lower).
eBay Germany has a higher entry barrier, most listings there are in German, but as you can see – it’s well worth the effort, with an average sell through rate of 38.3%.

Germany has strict customs regulations, and you need some translations done – but we were selling car GPS devices to Germany like crazy. It’s a great, big market – definitely worth checking.

I have to admit that Australia’s low sell through rate knocked me off my feet – I absolutely love this market! Great customers, great attitude, a lot of free income – it was always one of the best performing markets for us.
I don’t really have an explanation to the overall low rate, anybody has an idea? (leave a comment below)

What categories have the highest sell through rates?

You would never ever guess which category is the highest converting! 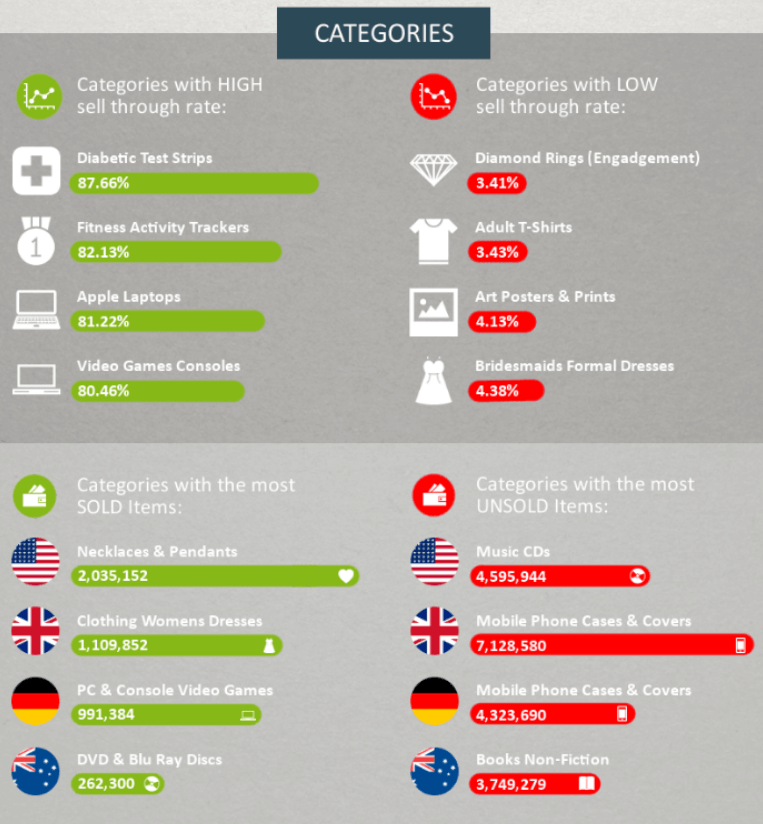 Note that these are not the top selling items on eBay, rather these are the products that have the best conversion, the highest % of listings that generate at least 1 transaction.

Come to think of it, it makes a lot of sense. The demand for life saving drugs and appliances is firm and people will naturally pay any price to stay alive!

The Fitness Activity Trackers’ extremely high sell through rate comes as no surprise as health and fitness are hot now!

It’s unbelievable how good Apple’s marketing machine is – 81.22% of all listed Apple laptops were sold.

Diamonds are one of Israel’s main export categories, it’s a tough overcrowded category – unless you are a 7th generation of a diamond family or have direct access to the mines in South Africa, you’d better stay away from this cruel category (it also has an extremely high return rate of nearly 20%!).

Do you see how OVERCROWDED the Mobile Phone Cases & Covers category in the UK is?! More than 7 million unsold items – it’s crazy! It’s probably a good idea so stay away…

Generally speaking, the fact that a category has a combination of a high SELL THROUGH RATE and a lot of SOLD items means there is still room for new businesses to join this category.

What categories have the highest average price (for sold items)? 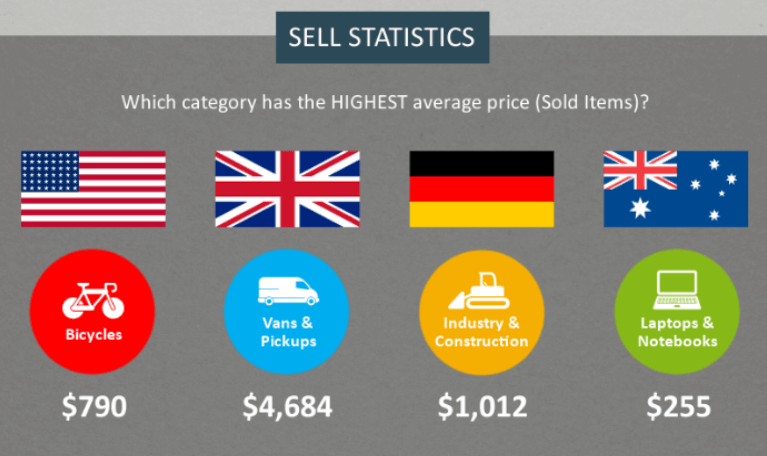 In our own eBay business, we were always after the “low volume, high prices” business.

Naturally, there is much more room for profit margins where the prices are higher.

With that said, in a previous post about the elements the world’s top eBay sellers add to their listings to increase sales, you’ll see that many of eBay’s top sellers are “high volume, low prices” businesses – which is perfectly fine as long as you have smooth, scalable logistics capabilities.

If you are like me (lazy 🙂 ) and want to go after the high price categories that actually generate sales, consider the above!

Here are the various eBay sites, and how many sales were generated on each of them during a 30 days period. 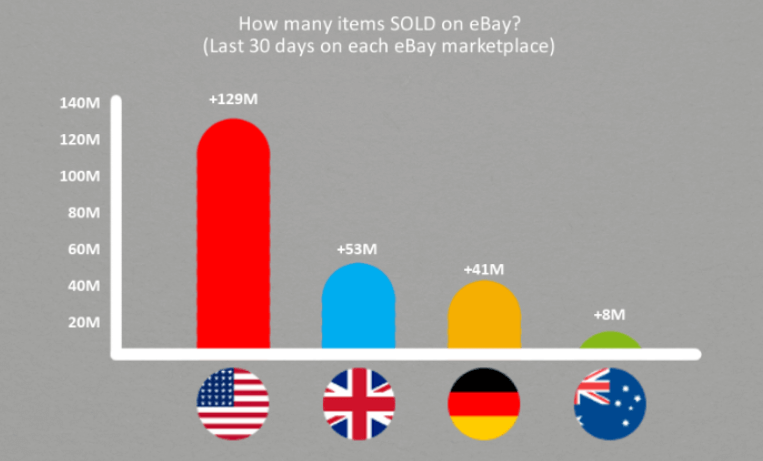 The fact that eBay Australia “only” generated 8 million sales doesn’t mean that it’s not an interesting market.
In fact – like I’ve mentioned before, Australia has always been among the best selling channels for us.

And hey, why not sell on all of eBay’s sites? As you can see, there are 10’s of millions of sales every month – if you can ship internationally, join the part and increase your eBay sales!

What is the average price for a sold item per eBay site?

Now this is very insightful! 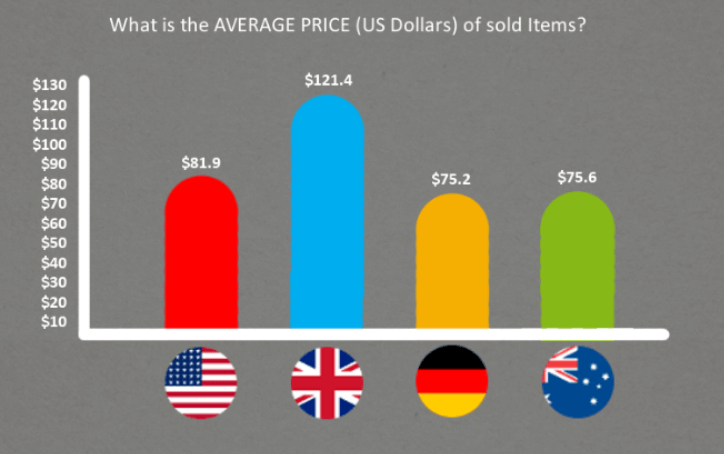 This probably means that there are a lot of categories on eBay UK that have high demand with low supply. Check this out if this is the case for your niche / category – you can probably get much more for your items on eBay UK than on US for example. 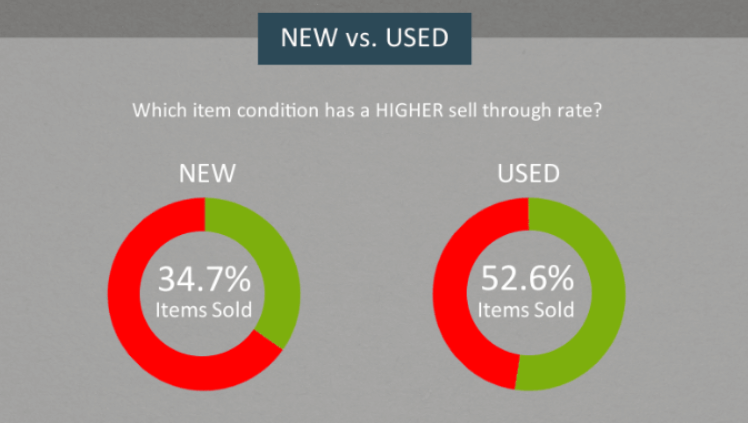 Did you know that the first ever item to sell on eBay was a used, broken laser pointer: 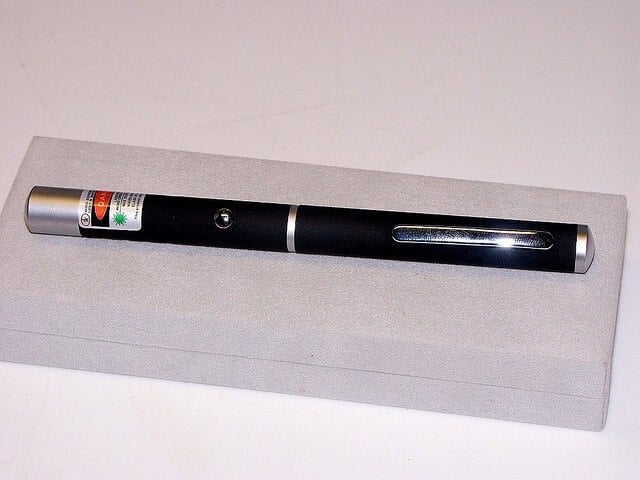 first item to sell on ebay was a broken laser pen

“On Labor Day weekend in 1995, computer programmer Omidyar wrote the code for what he called  an “experiment.” He wanted to know what would happen if everyone in the world had access to a single global marketplace. To test his idea, he came up with an auction website, where he listed a broken laser pointer that he was going to throw away. In the end, a collector bought it for $14.83.

Among the other items sold just a week after Omidyar launched eBay were autographed Marky Mark underwear for $400, a Superman metal lunchbox for $22, and a Toyota Tercel for $3,200.”

As opposed to Amazon – eBay is a marketplace that purely connects sellers with buyers, so there is a lot of room for used items on eBay!

eBay Germany actually generates more sales for USED items than for NEW! And it’s a close call on eBay UK – definitely check these markets if you sell used stuff! 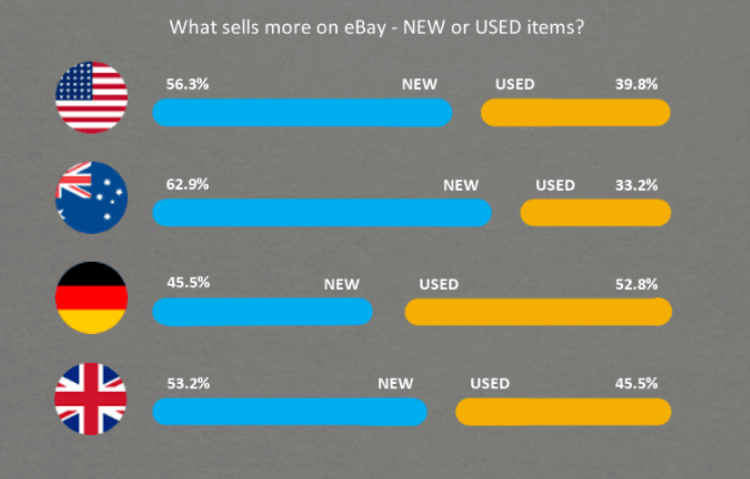 Big kudos to Elad Darmon for the awesome research!

What the World’s Top eBay Sellers Add to Their Listings to Increase Sales? 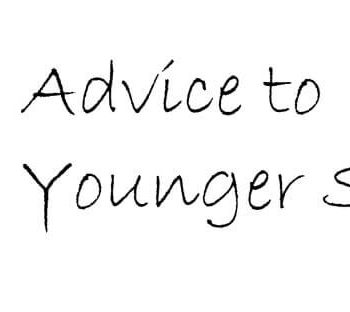 Letter to My Younger Self – Avoid These 4 eBay Selling Mistakes

Is it a good side business to import stuff on Alibaba and sell it on eBay/Amazon?